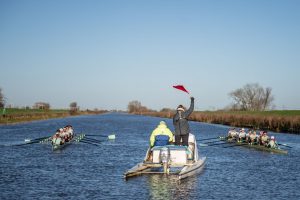 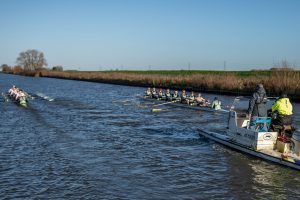 There were no worries for “Hakuna” as the crew rows through “Matata” in the Cambridge University Women’s Trial Eights Races on the River Great Ouse.

Weather conditions were perfect with clear blue skies and flat water giving the crews the perfect platform to race.  Judith Packer, Umpire for the 75th Women’s Boat Race on April 4th last saw the squad before the cancelled 2020 Boat Race.  Judith conducted the Toss for stations which Matata won, taking the west side of the course (nearest the Ely to Kings Lynn railway line).

“After 9 months of separation, during which time the world as we knew it was turned upside-down, to be able to be present once again with Boat Race Crews was a real privilege. It returned us for a few hours to some sort of normality whilst being able to test the Ely course with experienced coxes for the 2021 race for the first time.’ says Umpire Judith Packer

The Cambridge women took their crew names from the Swahili phrase, made famous in the Disney cartoon film, the Lion King. ‘Hakuna Matata’ roughly translated as ‘no worries’, reflects the attitude the squad has approached the slings and arrows of 2020.  The attitude may be relaxed off the water, but the action on the water showed a very different side to the team.

Both crews got off the start cleanly, with Matata taking an early lead going off at 42 to take themselves ½ length up by 500m.  Cox Angela Harper kept the crew clear and settled into a strong rhythm rating 34, but her crew were not able to move any further away.  ‘Hakuna’ were the bigger more powerful crew on paper and took advantage of this to start inching back.  Dylan Whitaker, coxing ‘Hakuna’ made the most of the environment as the river flow which has been unusually fast after recent rain.  When his crews passed the inlet from the River Lark he took the advantage, moving his crew into the middle of the stream.  ‘Hakuna’ steadily moved through Matata taking the lead at 3000m winning the race in a time of 16:05

“I think the race went well and the athletes enjoyed the experience.  While we’d always like to see a closer margin in the end, the first half of the race was tight and saw the lead change, so that was a valuable learning experience.  We’ve had time to reflect and debrief and have some clear ideas of things to work on moving forwards.”

“Having not raced in 10 months, today was an exciting opportunity for us to get back into racing mindset and show the speed that we have gained over the past few months.  This was an important step for us, and we look forward to building upon the lessons learned from today as we head into the New Year and prepare to race Oxford in April.”

Umpire Sarah Winckless will be the first female to Umpire the Men’s Boat Race in the event’s nearly 200-year history, a role she was due to take in the 2020 Boat Race.  With few races this year to umpire, it was good to see the river busy with crews, even if the banks were clear of spectators.

“It was brilliant to test the race logistics today and to have such close racing was a bonus.  After what has been an extraordinary year, it was a much-needed boost to see crews out racing.”

It looked like 10,000 Eels were placed in the best position when they won the Toss to pick the west side of the 2021 Boat Race River Great Ouse Trial race course.

Both crews went off sharp and aggressively, with 10,000 Eels hitting 48 and Henry 1 rating 49.   The early lead was taken by Henry 1, stroked by Ollie Parish who took the crew out to an early lead of ½ length by 500m.  It looked like it was game over for 10,000 Eels as they fell back ¾ length by 750m, but they kept pushing, clawing back the advantage held by ‘Henry 1’.  Charlie Marcus cox for Henry 1, moved into the middle of the river and was warned by Umpire Sarah Winckless several times through the middle of the course.  ’10,000 Eels’ made the most of the back and forth of their opposition, keeping a steady even line.  It was tense, tight racing as the crews were side by side, with Drew Taylor stroking ‘10,000 Eels’ at a steady rate of 35.5 versus Parish at 34.5.  Drew’s crew pushed back to ½ length by 1250m and it looked at one point that they might push through to take the lead.   The crews were nip and tuck, ‘Henry 1’ never able to push out to a bigger lead.  As the race came into the final 500m, both crews stepped up to rate 36/37, crossing the line, 1/3 length apart.   Men’s President Callum Sullivan in Henry 1 won the Trial Race in a time of 14:04

Callum says, “Trial eights was a closely fought contest that lasted the entire length of the track. With racing between crews being repeatedly tight during the weeks leading up to the event, we knew we had a fantastic race on the cards. Overall, the crews learned the importance of battling for every inch and of executing their race plan as a team. The racing gives me confidence our athletes are on the right track in preparing for the race against Oxford on April 4th.”

Men’s Chief Coach Rob Baker said, “I’m very happy with the racing today. Both crews showed a lot of fight and held their nerve in challenging racing. There’s still a lot of work to do before April 4th, but what I saw today is pleasing”.

Any cookies that may not be particularly necessary for the website to function and is used specifically to collect user personal data via analytics, ads, other embedded contents are termed as non-necessary cookies. It is mandatory to procure user consent prior to running these cookies on your website.